Doylestown Lodge as we know it is actually the second Masonic Lodge in town. It was a descendant of Benevolent Lodge No. 168 which was constituted in 1829. That lodge met at “Temperance Hall” between Church and Broad for eight years, but for reasons unknown, the lodge failed and was vacated in 1837. Without Benevolent Lodge, the need for a local Masonic meeting place remained as the next closest lodge was in Bristol.

Thus on August 27th, 1850, Doylestown Lodge No. 245 was created, and the first meeting was held by its ten Charter Members on Monday, September 16, 1850 (the Monday preceding the full moon) at Temperance Hall. Before electricity, lodges would meet around a full moon as there was the most light available at night – and many members were traveling through darkness by carriage.

A few months later, Doylestown received its Warrant from the Grand Lodge of Pennsylvania on August 27, 1850 and a project was formed to secure an official meeting hall as an alternative to Temperance Hall. By the end of 1850 there were 18 members and stated meetings were officially moved to Friday nights.

Doylestown Lodge officially purchased the current site at 55 East State Street on April 8, 1857, originally called “Beneficial Hall” for $2545 and has been meeting here ever since January 1858.

By our 50th Anniversary, membership increased to 221 members. Members of the lodge, averaging 30 years old came from all walks of life: farmers, doctors, painters, lawyers and tinsmiths. Today we have around 550 members and will be celebrating our 175th Anniversary in 2025.

To commemorate the 175th Anniversary of Doylestown Lodge, a collection of “Master Medals” are being commissioned from 2016 – 2025 to celebrate the 10 year countdown. 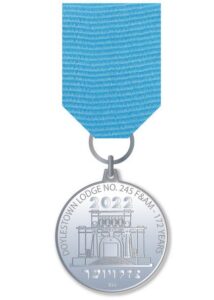 172 Years of Doylestown Lodge. Embossed with King Solomon’s Temple, a central theme in Freemasonry and representing the origin and basis of design for future Masonic lodge gatherings. In Freemasonry, the Temple of Solomon resembles a creation by the Grand Architect of the Universe rather than a work created by human hands and was dedicated as a peace offering to the Most-High to bring the people Israel together in solemn unity and worship. The ribbon is light blue representing our Blue Lodge colors. The Hebrew slogan “Righteous and Worthy” (ויושר צדק) is emblazoned on the medal. 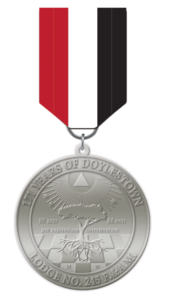 171 Years of Doylestown Lodge. Embossed in the center is a representation of the Acacia tree, which has long been held as a symbol of innocence and immortality. Here, the Acacia is strongly rooted in the traditional masonic checkerboard floor and is guided by the rays of change, represented as the equilateral triangle or delta. The latin phrase, “per sapientiam incrementum,” meaning “growth through wisdom” or more literally “growth of wisdom,” adorns this medal while the three colors of the ribbon are indicative of life, enlightenment, and the darkness of the unknown.

170 Years of Doylestown Lodge. Embossed in the center is a flaming torch, figuratively representing energy, transformation, enlightenment, and problem-solving. Embossed on the handle is a triangle (or Delta) indicative of the manual carriage of light by humankind and the transformation it thus creates. The Latin phrase “Quaerimus Usque In Sempiternum” below the torch means “Forever Seeking” while the blue, white, and yellow striped ribbon represents the ongoing journey to enlightenment as illuminated by the Sun and Moon.

169 Years of Doylestown Lodge. Embossed in the center is a representation of Boaz and Jachin, the pillars which stood in the porch of King Solomon’s temple. The pillars are well known Masonic symbols that many believe represent that which one “enters” to begin their Masonic journey. The Latin phrase “Ad Lucem” under the pillars means “Toward Light”. The ribbon is black and represents the darkness left behind in the passage to becoming a more enlightened individual through self-betterment, fellowship, and charity. 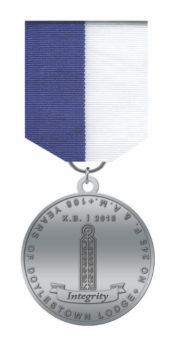 168 Years of Doylestown Lodge. Embossed in the center is a representation of the Plumb, a well-known Masonic symbol representing “integrity.” Masons are taught to stand tall and walk uprightly before God and Man. The ribbon is blue and white, and while the color blue is frequently associated with integrity, the combination of blue and white is also used to promote the ideas of knowledge and charity. 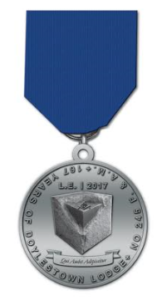 167 Years of Doylestown Lodge. Embossed in the center is a representation of the rough and perfect Ashlar. The Ashlar is a Masonic symbol representing the making of stone from rough to smooth and better able for to be used by the builders. It represents the notion of becoming a member of the fraternity and contributing to its unity. In the spirit of the Blue Lodge, the ribbon is solid blue. 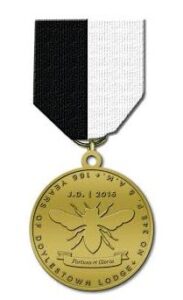 166 Years of Doylestown Lodge. Embossed in the center is a representation of the Honeybee. The Hive is an ancient Masonic symbol representing unity and industriousness, and is a fitting symbol for this year’s theme of “Fortune & Glory.” In the spirit of the traditional mosaic pavement, the black and white ribbon denotes the duality of light and darkness.