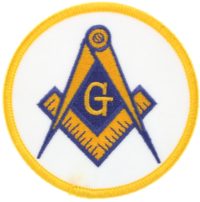 Doylestown Lodge as we know it is actually the second Masonic Lodge in the borough of Doylestown. It was a descendant of Benevolent Lodge No. 168 which was constituted in 1829. That lodge met at “Temperance Hall” between Church and Broad for eight years, but for reasons unknown, the lodge failed and was vacated in 1837. Without Benevolent Lodge, the need for a local Masonic meeting place remained as the next closest lodge was in Bristol.

Thus on August 27th, 1850, Doylestown Lodge No. 245 was created, and the first meeting was held by its ten Charter Members on Monday, September 16, 1850 (the Monday preceding the full moon) at Temperance Hall. Before electricity, lodges would meet around a full moon as there was the most light available at night – and many members were traveling through darkness by carriage.

A few months later, Doylestown received its Warrant from the Grand Lodge of Pennsylvania on August 27, 1850 and a project was formed to secure an official meeting hall as an alternative to Temperance Hall. By the end of 1850 there were 18 members and stated meetings were officially moved to Friday nights.

Doylestown Lodge officially purchased the current site at 55 East State Street on April 8, 1857, originally called “Beneficial Hall” for $2545 and has been meeting here ever since January 1858.

By our 50th Anniversary, membership increased to 221 members. Members of the lodge, averaging 30 years old came from all walks of life: farmers, doctors, painters, lawyers and tinsmiths. Today we have around 550 members and will be celebrating our 175th Anniversary in 2025.

In between those years, the Lodge has continued operations through the Civil War, WWI and II, Korean, Vietnam, and the Gulf War – which brings us to charity.

The Lodge currently contributes around $10,000 annually to charity. Charitable donations have been a hallmark of the lodge since the beginning. We have contributed donations and relief from events such as the Great Chicago Fire in the 1800s, to donating Liberty Bonds in WWI and WWII, including numerous disaster relief initiatives, local scholarships and community events (The Travis Manion 9/11 Heroes Run, #Pray for Dominic), down to helping local families who need support.

There are other masonic groups related to Doylestown Lodge that have charity-fronted programs as well. Many members also support the Shriners Hospital, Scottish Rite Children’s Dyslexia Centers, the Masonic Retirement Homes and other Freemason-led charities. To that point, Doylestown is also the meeting point for other Masonic groups including the Royal Arch Masons, Cryptic Council, Knights Templar (Commandery) and Eastern Star. Each group has their own charity initiative as well, such as the Knights Templar Eye Foundation. Doylestown Lodge also supports an Almoners Fund and Red Cross Blood Drive through the lodge.