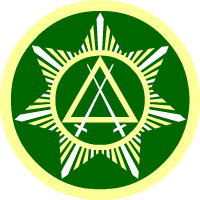 In honor of St. Patrick’s Day, this month we look at the Order of Knight Masons – an invitational, chivalric Masonic order.The Order of Knight Masons was formed in Dublin, Ireland in 1923 for the purpose of governing three degrees previously known as the “Green Degrees.” These were formerly controlled by the Orders of Knights Templar in Ireland (for more than eighty years) and conferred in their subordinate bodies.

The degrees are ancient and, in essence, Old Testament based; all concerning the return of the Jewish people from Babylonian captivity. The triad of Knight of the Sword, Knight of the East, and the Knight of the East and West completes the sequence of universal Masonic degrees conferred within the Irish system. “Councils” of Knight Masons (presided over by Excellent Chiefs) also operate in South Africa, Hong Kong, Jamaica, Tasmania, India, Gibraltar, Australia, New Zealand, Bermuda, Greece and England.