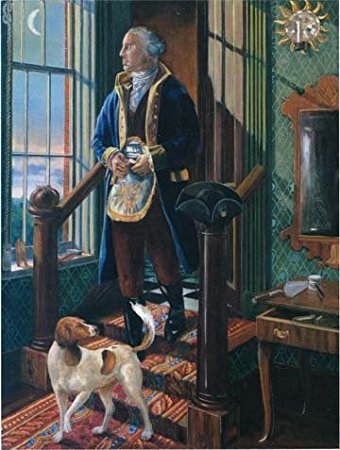 There are many sayings that we use daily, perhaps without knowing the meaning or history behind the phrases.  Sayings such as “giving them the third degree,” “blackballed,” and to a lesser extent “being hoodwinked” are examples of phrases which we’ve all heard, and are quick to note a Masonic reference behind the saying.  I won’t be going into more depth on those sayings because I’d like to propose a new phrase that has been used for a significant length of time, and I would argue has a Masonic origin, “my dog ate my homework.”

I’d like to be clear before I start that this is more of a joke than a serious argument over linguists, but I hope you at least get a chuckle while reading my proposition, and there is an interesting story behind it all.

First, a quick history lesson!  The Grand Lodge of Pennsylvania uses the Ahiman Rezon as its Book of Constitutions, which was originally written by Laurence Dermott (published in 1756) for use by the Ancient Grand Lodge of England which formed in 1751.  The specifics can be found in our version of the Ahiman Rezon, Section 12.01, which notes that our version was “prepared by the Grand Secretary, Rev. Brother William Smith, D.D., Provost of the University of Pennsylvania, and was almost entirely a reprint of Dermott’s work; it was approved by the Grand Lodge November 22, 1781, published in 1783, and dedicated to Brother George Washington.”

If you think some of the guys at work or lodge are real characters, you should invest a few minutes and read the first few pages of the original Ahiman Rezon; Laurence Dermott is quite the character.  Dermott begins by explaining that the purpose of his book is to be a conduct guide for the Brethren.  Having determined the purpose of his writing, he gathered his supplies and claims “I immediately fancied myself an Historian, and intended to trace Masonry not only to Adam in his sylvan Lodge in Paradise, but to give some Account of the Craft even before the Creation.”

Having made such a bold claim, Dermott continues to explain that during his attempt at being a historian he “insensibly fell into a Slumber, when me-thought four Men entered my Room.”  He describes these four men as Sojourners from Jerusalem, all brothers, going by the names of Shallum (the chief of the four), Ahiman, Akhub, and Talmon.  After hearing stories from the four, Dermott proceeds to write his account which he then presents to a fifth man that appears (“a grave old Gentleman, with a long Beard” which “the four Sojourners did him the Homage due a Superior”).

All of Dermott’s hard work is then essentially shot down by the apparently all-knowing man (Superior), who at least does Dermott the good deed of explaining that Masonry has been around since the beginning of time, and that “the whole Mystery was communicated to a very few at that Time; that at Solomon’s Temple (and not before) it received the name of Free-Masonry.”  Dermott then proceeds to finish his story by claiming:

“While he was speaking these last Words, I was awakened by a young puppy that got into the Room while I slept, and, seizing my Papers, eat a great Part of them, and was then between my Legs shaking and tear the last Sheet of what I had wrote.”

There you have it, the oldest reference (that I could find) of a dog eating homework!