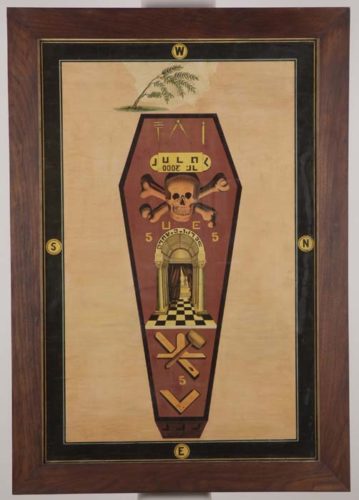 Tracing boards are painted or printed illustrations depicting the various emblems and symbols of Freemasonry. They were commonly used as teaching aids during the lectures that followed each of the Masonic Degrees. Sets of three boards, corresponding to the three degrees, were heavily used by the Craft during the 1700s.

The tracing board (shown below) used for the Master Mason Degree was rich in symbolism. The four corners which represent the grave site also symbolize the four corners of the lodge room (note the Square placed near the East).

Planted above the coffin is a sprig of Acacia, while shown within it are a series of symbols specific to the Master Mason Degree of old. At the top are a Masonic Skirret, Compasses, and Pencil (the original “working tools” of the degree which symbolize building a strong foundation). Visible just below the epitaph and bones of our Grand Master is a depiction of the interior of Solomon’s Temple (note the columns and mosaic payment). Below these are the Plumb, Level and Heavy Setting Maul – the implements of destruction originally described in earlier variations of the degree.