He wears a belt full of working tools, is a master of secrecy and owns a tuxedo – but let’s be honest, that evidence is anecdotal at best. However, I submit to you that the Dark Knight is in fact a Freemason, and here is the proof.

Exhibit A. Legends of the Dark Knight #86 – 88 (1996) is a three-part mini-series called “Conspiracy” in which the Caped Crusader investigates a series of murders with loose ties to Masonic legend (amongst the legends of other secret societies). Of all the various murders, Batman immediately recognizes a pattern in three cases and contacts Alfred to confirm his suspicions. 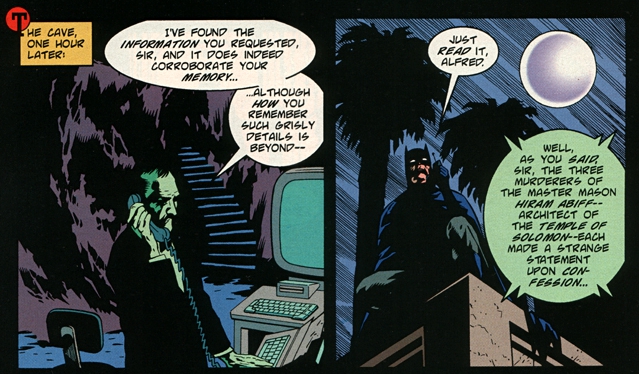 As seen above: Alfred does some research, and confirms that the style of the murders exactly matches Batman’s “memory” of fabled Masonic ritual (specifically, the Hiramic Legend).

The word “memory” is specifically italicized to draw the reader’s attention; highlighting that Batman not only “remembered” these details (the signs, penalties, and even the dialog of the three degrees) firsthand, but also he recalls them verbatim! I can tell you from experience that a majority of our members cannot cite these details; and that you would have to see these degrees in person to know some of these particulars. Batman’s intimate knowledge of Freemasonry is even further highlighted in the story, especially by its comparison to his lack of knowledge regarding the inner workings of other secret societies. He knows the full oath and obligation of all three degrees, but has to look up what an Orobus is?

There is a lot of evidence that supports my case. Still not sure? Fine, be that way. So he happens to know the ritual and legends somehow. That doesn’t prove he is a “practicing” mason, right? We don’t actually see him “employing” masonry in any tangible way in his own life that suggests it is anyway important to him. 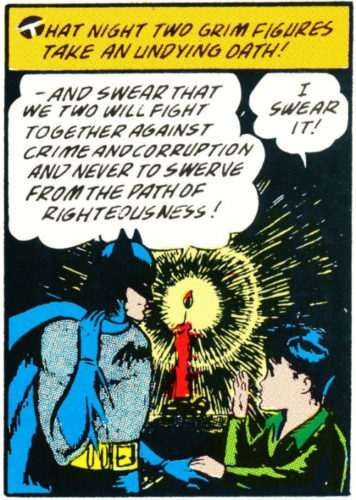 Exhibit B. Detective Comics #38 (April 1940). This issue, the first appearance of Robin, depicts Batman administering the oath and obligation of a crime fighter to his apprentice by candlelight – and by using a grip no less.

This is not just some one-off illustration either; this initiation scene (redrawn, but identical in every way) was revisited by DC Comics in 1997, 1999, 2004 and 2010; and is official canon.

So to conclude: we have actual documented proof that Batman not only has impossibly intimate firsthand knowledge of the masonic legend; but that he also used said masonic ritual to initiate his own apprentice into his craft (crime fighting). If we were to play detective and apply Occam’s razor (“the simplest answer is most often correct’) to this riddle, the answer is obvious… Batman: Freemason.