Every meeting of the Royal Order of Scotland could, in theory, take a dramatic turn. Beside the Chairman a seat is left empty, except for a robe, crown and sceptre, in case the hereditary Grand Master, the King of the Scots, should decide to take up his place. Robert the Bruce is said to have conferred the degrees of Heredom and Rosy Cross on a group of knights who assisted him in his victory over the English at the Battle of Bannockburn in 1314.

The Order grew dramatically over the next 20 years in France, with numerous Provincial Grand Lodges being erected throughout the country. A decline of the Order was just as rapid and probably due to the persecution that went on during the Napoleonic era. However, by the middle of the 19th century, its global reach was being re-established. We can date the Order’s oldest existing Provincial Grand Lodge to 1852. Curiously, it is in Sweden.

In a masonic building in Stockholm, a Tower of Refreshment was uncovered; the small-scale model of a building used to award one of the two degrees of the Order seems to prove the connection.

Since the King of the Scots is the Grand Master of the Royal Order, the Chairman of the Grand Lodge has the title of Deputy Grand Master and Governor. The honour is held today by Sir Archibald Donald Orr Ewing, 6th Baronet. He presides over a network of 91 Provincial Grand Lodges around the world: five in Scotland and 33 in England, with the rest throughout Europe, Canada, the US, Australasia, Africa, East Asia and the Caribbean. The organisation has about 15,000 members around the globe and continues to grow.

Today, the headquarters of the Royal Order of Scotland is in The Chapel of St John in St John Street in Edinburgh. It contains what is considered by many to be the oldest purpose-built masonic lodge room in the world, having been built in 1735. Minutes of a meeting on 1 February 1787 show the poet Robert Burns was assumed a member of Lodge Canongate Kilwinning, No. 2. It still meets at the lodge room, but the premises have been the property of the Royal Order since 1993.

The Grand Lodge is unusual for being one of only a few of its kind to admit new members itself, welcoming around 30 each year. Grand Lodge can accept members from anywhere, but typically they are from in and around Edinburgh, or parts of the world where no Province presently exists. Provincial Grand Lodges form the only other level of the organisation.

To join the Royal Order of Scotland, it is necessary to have progressed in the three degrees of St John and maintained your membership for at least five continuous years. The applicant’s lodge must work under a constitution recognized by The Grand Lodge of Antient Free and Accepted Masons of Scotland, and you must be a follower of the Trinitarian Christian faith.

These qualifying criteria apply wherever you are in the world. However, applicants need first to be invited by two sponsors who must be existing members; further, all applications for membership are assessed by the Executive Committee of the Grand Lodge or by the appropriate Provincial Grand Lodge.

The ritual, wherever it takes place, is conducted in English (with one exception – which may be as a result of the connection to the Hague in the mid18th century). The verse is rhythmic and rhyming, and is quite beautiful. The Order consists of two degrees which may be conferred on the same occasion, or separately. Members are initially advanced to the degree of Heredom of Kilwinning and, thereafter, promoted to the Knighthood of the Rosy Cross, which of course hearkens back to the lore of the very beginnings of the Order and that famous day in Scottishhistory, more than 700 years ago. 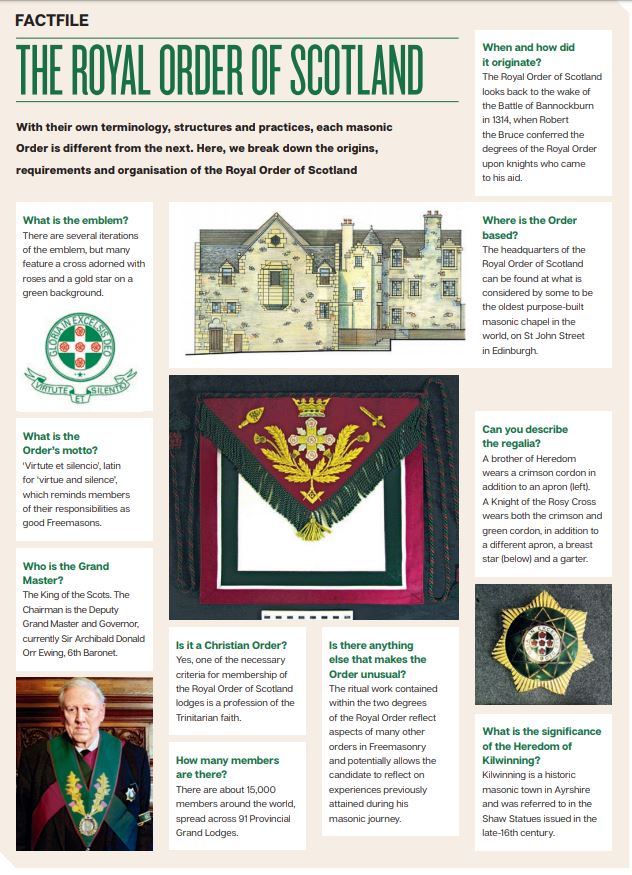