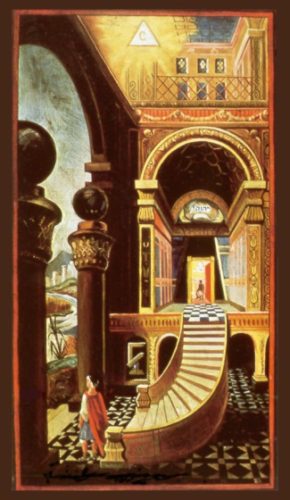 The most prominent symbol on the Second Degree Tracing Board is the winding staircase of the Temple. Seven is a sacred number, and the seven steps of the staircase may be held to represent the seven liberal arts and sciences referred to in the Degree. The seven steps are interdependent and are strung together as follows:

Grammar is the foundation of language. The art of speaking fluently is Rhetoric – but without Logic the previous two are just an empty, senseless flow of words.

The exchange of knowledge allows you to learn to compare. The science of comparison is Arithmetic. The fifth step, five being the predominant number of this Degree, is Geometry which is established as the basis of our art. Geometry has been described as the science of harmony in space. Its laws apply equally to the minute world of atomic physics and to the immense world of astronomy.

Music is the geometry of sound. Every note in the musical scale is measured in steps and cannot free itself from geometry without dissolving into discord.

The seventh, and uppermost, step is Astronomy. From here we contemplate the wonder and the awesome magnitude of the Heavens. As we battle to understand infinity with our finite minds, it should help to put the rest of our lives into better perspective and expand our personal horizons.