Also known as the Pythagorean Theorem, this equation (a2 + b2 = c2) is the building block of most mathematical problem solving. In basic form, it can tell you how to create a right angle, while advanced versions can measure solar systems. I’d explain how that works in more detail, but it involves a lot of math.

Yes, that was a math joke.

So, why is this relevant to us? The symbol is used to represent Past Masters after all: 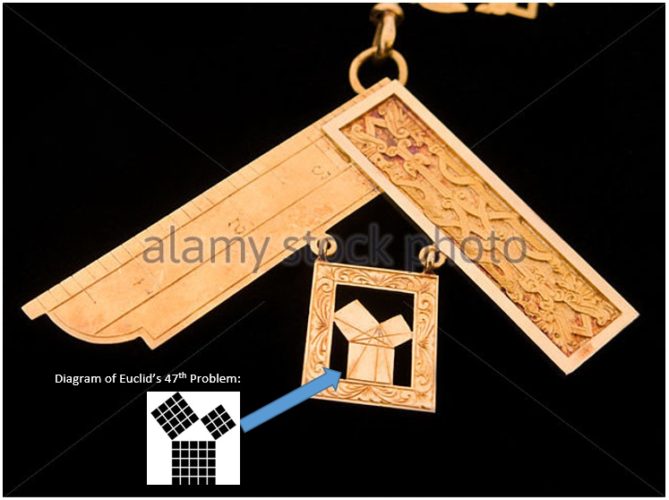 Well, despite the multitude of allegorical answers littering the Internet, I actually found one that felt satisfying:

Historically, a building’s cornerstone was laid at the northeast corner. This is because ancient stone masons first laid out the north and south lines of a foundation by observing the North Star and the Sun… mainly because they believed them to be fixed points to measure from. From that, they next determined the lines east to west.

To calculate that measurement, a loop of rope was fashioned (knotted in 12 equal segments) and used to measure out a right triangle. Three knots measured one side, four the second, and five the longest side – a ratio called 3:4:5, which represents the simple equation 32 + 42 = 52, or 9 + 16 = 25.

The rope was first tied to a stake at the Northern point and then pulled three knots to the south (forming a straight line). At the Southern stake, the rope was then pulled four knots to the west at a 90o angle from the north/south line (a square determined the angle). This segment thus created a right angle which ran from true east to west.

With three knots north/south and four knots east/west, the remaining five knots formed a perfect right triangle (connecting the Western and Northern points). The lack of slack in the rope also proved that our square (the 90o angle) was in fact square – and boom – we can now safely lay our cornerstone on a geometrically square foundation!