While we’re on the subject of clubs, we’re also going to look at the Independent International Order of Owls (no relation to the more popular Order of Owls, an animal-themed lodge akin to the Elks). Founded in 1890, the I.I.O.O was a Masonic-related group that promoted recreation and sociability among its members.

Local units were called Nests. The head officer of each Nest was known as Sapient Screecher, while the national body was called the Supreme Nest of the World. 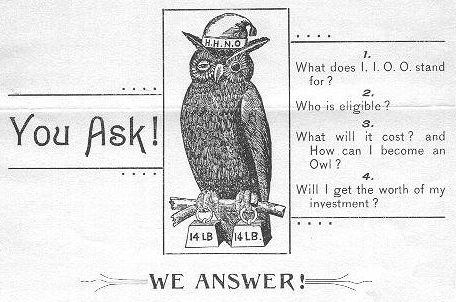 For $10 ($15 if you had a bad back or leg for some reason) the Sapient Screecher would confer a degree called “The Grand Kibosh” (which quite frankly sounds more awesome than it could possibly have been).

The petition actually includes a line: “My boy, if you are not an Owl, you are strictly NOT IN IT.”